While the mobile tech industry is making necessary changes to adapt to the upcoming Apple ATT feature, Facebook is doing whatever it can to gain public support against it. The social media tech giant launched an accusatory ad campaign against Apple stating that the new App Tracking Transparency (ATT) update would adversely impact small businesses by cutting their sales revenue by 60%. However, Harvard Business Review (HBR) reports that Facebook’s complete argument is flawed and cited inaccurate numbers.

Digital advertisers like Facebook are against the ATT update because the privacy feature will make it mandatory for all developers to get iPhone users permission to track their online activity across apps and websites. As mobile advertisers Believing that most users will opt-out of tracking, Facebook argues that it will drastically affect personalized ad revenue. But this argument is ignoring the invasive means by which users’ data is collected to show them personalized ads and that is what Apple is trying to limit.

Facebook says it wants to stand up for small businesses in the face of these changes, which it is perfectly entitled to do. But disinformation about advertising effectiveness isn’t the way to do that. 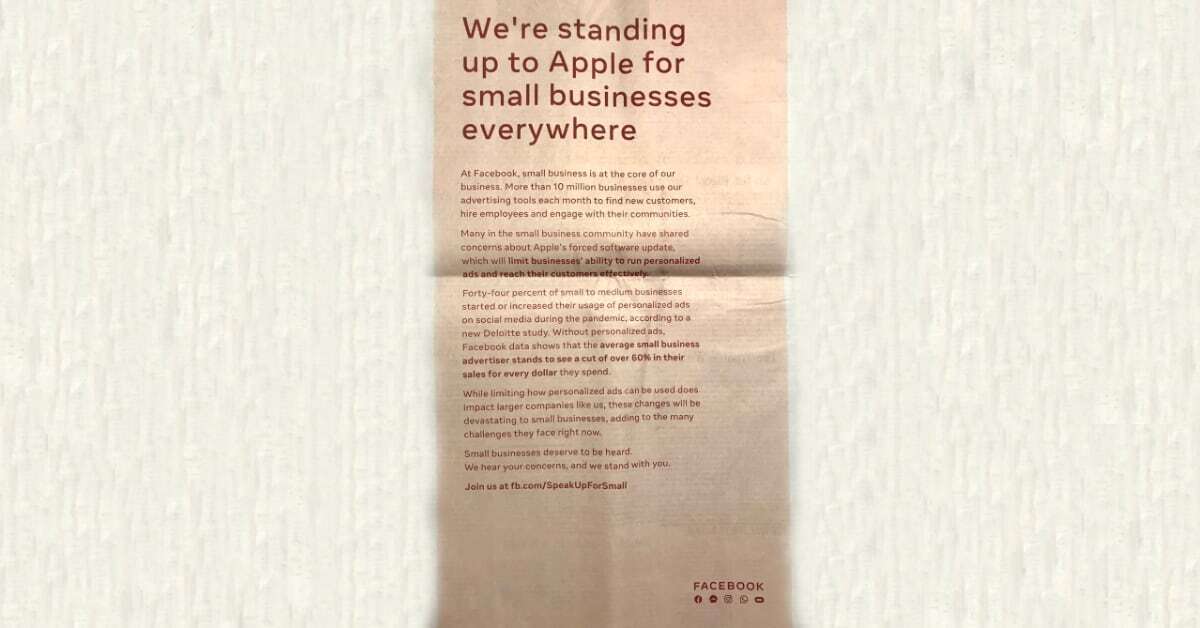 To understand why this difference matters, imagine a company that knows its customers very well. It can predict with a high degree of accuracy how much a customer will spend in the coming month. If the company targets its advertisements to those customers who are expected to spend a lot, each dollar spent on advertising will be associated with high revenues. That’s great — the company has achieved a high return on ad spend. But here’s the thing: These customers would have generated high revenues anyway. That’s why they were targeted in the first place. So it would be a mistake to conclude that these customers spent more because of the personalized ads.

Furthermore, the quoted 60% share cut due to Apple’s ATT feature is also problematic because the company failed to report which two campaigns were compared. Thus, is not supported with evidence.

For all we know, they might involve different industries, different companies, different products, different times, different places — and if they did, then Facebook’s comparison wouldn’t mean much. In fact, it might just show that companies who knew their customers well achieved a higher return on advertising spend than companies that didn’t.

Lastly, HBR investigated Facebook’s quoted new Deloitte study to claim that 44% of small businesses increased the use of personalized ads during the COVID-19 pandemic and found that the numbers are incorrect.

In its study, Deloitte asked companies from nine industries whether they increased their use of targeted advertising on social media during the pandemic. The industry with the largest increase was Telecom & Technology, but the increase was only 34%. Other industries had much smaller increases. Professional-services firms, for example, had an increase of only 17%. Facebook, it seems, cherry-picked the data that best supported its case — and then increased the size of the cherries it picked by a third.

Personally, Facebook is currently the most tone-deaf company which is ignoring users’ demand for more privacy and dissent for invasive ways to record their personal data. Not only unable to convince the public, but Facebook employees are also not buying the company’s line-of-argument to track users’ activities by storing their data without their consent or knowledge.