He says that the two tech giants together with Oracle and other companies have “jumped into bed together” to start a “hostile, organized campaign against Android”.

The article claims these companies are buying patents from bankrupt companies like Nortel and Novell to stop others from innovating. He also claims that Microsoft is charging $15 for every Android device being sold, to make Android devices more expensive and to make sure Google doesn’t get to buy the Nortel patents.

Drummond claims this is a very “anti-competitive strategy”, which makes it more difficult and expensive for companies to manufacture Android devices. He does however say that Google understands the technology and knows it’s a very competitive market.

We’re not naive; technology is a tough and ever-changing industry and we work very hard to stay focused on our own business and make better products. But in this instance we thought it was important to speak out and make it clear that we’re determined to preserve Android as a competitive choice for consumers, by stopping those who are trying to strangle it.

From the other side of the fence, Microsoft has also replied to the situation. The matter was handled by Microsoft’s General Counsel, Brad Smith who said that they openly asked Google to bid jointly for Nortel patents, but Google refused. 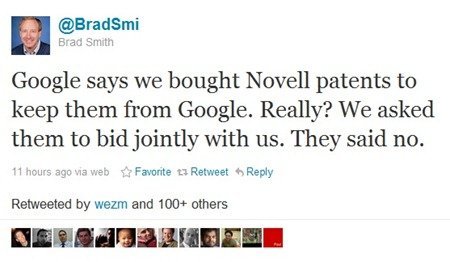 In addition, Microsoft’s Chief Frank Shaw also commented by a tweet backing up Smith’s story. Shaw claims he had emailed Kent Walker regarding the Nortel patents before too. 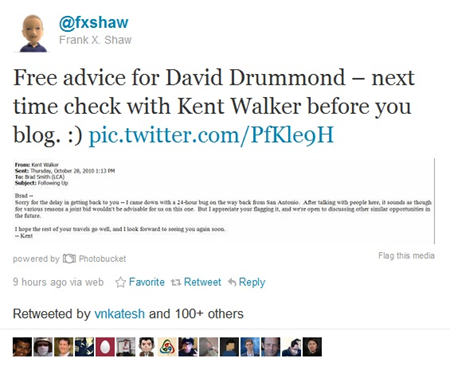 The email says the following:

Sorry for the delay in getting back to you — I came down with a 24-hour bug on the way back from San Antonio. After talking with people here, it sounds as though for various reasons a joint bid wouldn’t be advisable for us on this one. But I appreciate your flagging it, and we’re open to discussing other similar opportunities in the future.

I hope the rest of your travels go well, and I look forward to seeing you again soon.