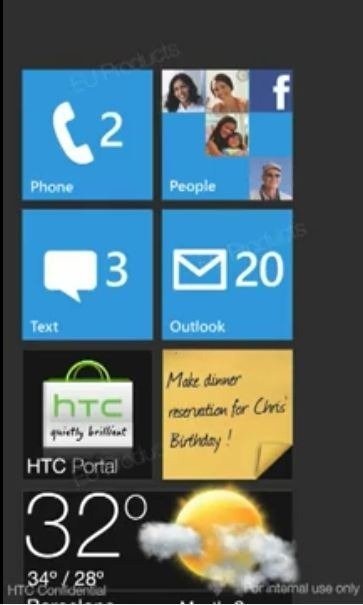 The video was spotted by windowsphone.mobilitydigest.com which shows the customized UI of Windows Phone 7 on HTC devices. The video is said to be confidential but still somehow it leaked and we can guess its real by the look and feel of the UI. Many apps were shown in the video. The first one demoed was a 3D notes app that has some great 3D effects and looks amazing. Next, the UI of weather and stocks application is shown which again has some amazing effects, and in the end, the video was shown a Love Me/Love Me Not game. The home screen in the video clearly showed the tiles of HTC portal and a flashlight application. The overall combination of HTC sense UI with Windows Phone 7 looks amazing.

Apart from this, another video was shown by PocketPT today which shows the HTC interface Hub on an unknown Windows Phone 7 device. This video also showed the weather app which looks just like the one shown in the previous video. The app has good animations but they seem to have gone overboard for just a quick peek at the weather.

Overall the Sense UI experience shown in both videos is amazing. We can’t wait for HTC’s Windows Phone 7 devices to hit the stores!