M1 MacBook Air and M1 MacBook Pro models are the first generation Macs to ship with Apple Silicon. Powered by a new 5nm process M1 chip, the Macs deliver faster performance and incredible battery life like no other laptop in the market currently. Tear down expert, iFixit pulled apart the 13-inch MacBook Air and MacBook Pro to compare their hardware with their Intel-based counterparts.

“Our curiosity has been rewarded in the most unintuitive way possible. While Apple touts its M1-powered Macs as nothing short of a revolution, internally, they could hardly be any more similar to their predecessors. The new 13” MacBook Pro looks so familiar inside, we had to double-check that we didn’t accidentally purchase the old model. Meanwhile, the new MacBook Air’s biggest move was to … eliminate the fan. Amazing, right? Well, in many ways, yes. Let’s dig into it.”

iFixit is famous for investigates the internals of devices and scoring their repairability. Here is the complete iFixit teardown report of the new M1 MacBook models. 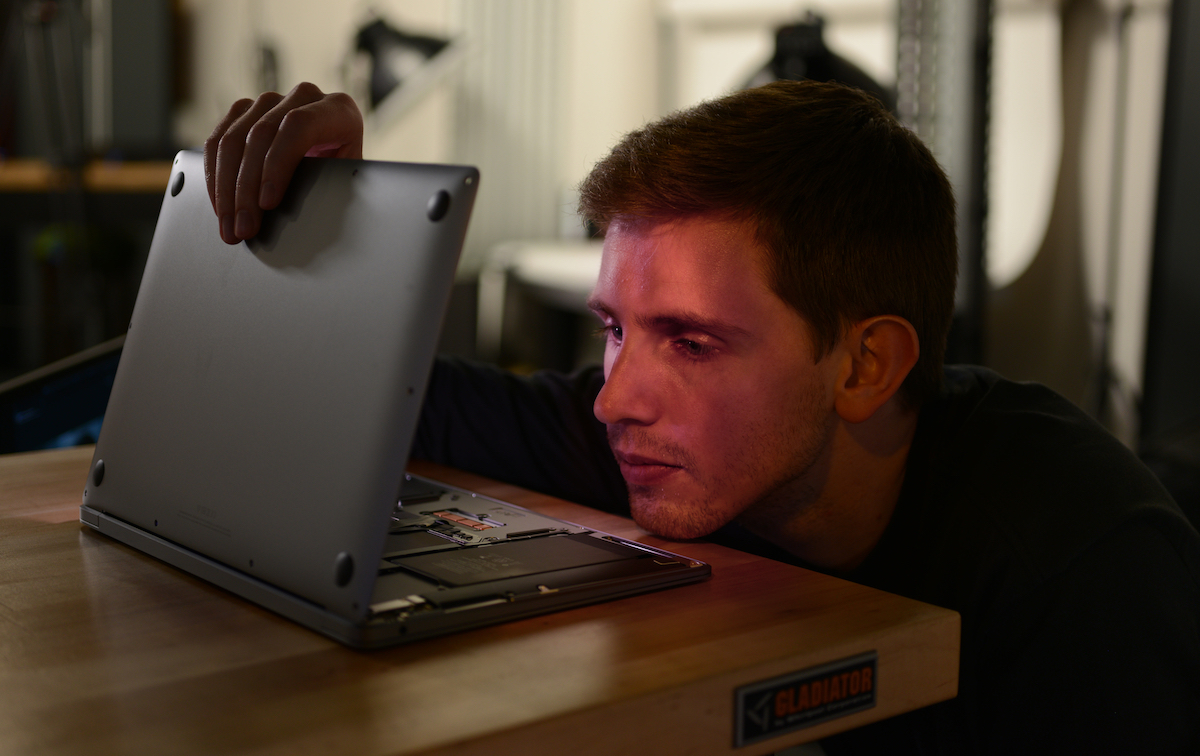 iFixit Tear Down of M1 MacBook Air and Pro

The only major difference (besides the M1 chip) between the 13-inch Intel-based MacBook Air (early 2020) and the 13-inch M1 MacBook Air is the fan. Intel-based model is equipped with one and in the Apple Silicon model, Apple has replaced with an aluminum heat spreader at the edge of the logic board.

Although the previous generation MacBook Air had heating issues, the reviewer hopes that the new thermal arrangement is adequate for the new Apple Silicon.

“If this new thermal arrangement is truly enough to meet the M1’s needs—and early reviews indicate that for most workloads, it is—it means less maintenance and one less point of mechanical failure. Will anyone actually miss having to open their laptop to de-gunk or replace a dusty old fan?”

The 13-inch Intel MacBook Pro and 13-inch M1 MacBook Pro have the same cooling system with the same fan. But the reviewer questions the need for a fan in the new Pro model.

“In other words, what you’re not hearing there is the sound of an aggressive fan curve. This thing likely never spins at more than a fraction of its upper limit. Remember, this same M1 chip performs well in the fanless MacBook Air, so this fan likely doesn’t have all that much to do even under extended load. The M1 is, apparently, just that good.”

The M1 chip is the biggest differentiating piece of hardware between Intel Core and Apple Silicon Macs. Built on 5nm process, the chip has 8 core CPU with an integrated 8 core GPU. The board also has a unified memory architecture with 8GB memory, configurable up to 16GB.

This tear down also revealed that the new M1 MacBook models have quite similar hardware, except for a more powerful phase design and a few extra I/O expander chips. Here is the list of all the chips discovered in Apple Silicon Macs.

What to make of our first peek at the future of the Mac? What may seem like superficial changes are really the expression of years of intense work, with hints of a lot more to come. These are the MacBooks Apple has wanted to ship for years, made on its own terms. They’re quiet, fast, and interesting. They’re also less accessible for upgrades and repairs, and are going to be difficult to repair outside Apple’s network for the foreseeable future. There should be a word for proud and disappointed—disaprouded?