Ever had to restore your iPhone from iCloud only to wait for all the apps to download and install? Well, now you can skip all of that with the latest iOS 10 prioritized app downloads feature.

With iCloud backups, users can restore their iPhones to the same state as it was before. This means that all your apps also get re-downloaded along with your data contained in them. However, if you have a large number of apps, the restore can take ages and sometimes your most important apps get pushed to the end of the downloads queue. With iOS 10, users on iPhone 6s and 6s Plus have the facility of prioritizing downloads for certain apps over the others, allowing you to get favorite apps up and running quickly. 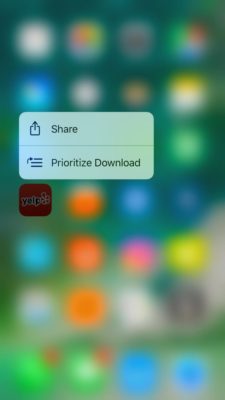 The feature can be accessed using the 3D touch mechanism on an app icon to activate a drop-down menu which will give you the option to prioritize that app’s download over others.

Discovered by Reddit user nite_, the feature is a life saver for those looking to quickly get their new or recently formatted iPhones up and running as quick as possible. The downside of it all is that the feature, as mentioned above, can only be used via 3D touch which means that it is currently limited to iPhone 6s and 6s plus.

iOS 10 is Apple’s latest update for iPhone, iPad, and iPod touch and contains major new features including third party developer integrations for iMessage, Phone, Apple Maps. Other new updates include a redesign for notification center, lock screen, and widgets while the control center has also been modified and split into two panes. 3D touch integration is much better now and shows widgets when used on app icons on home screen. It also works with notifications to show rich previews. Users can also delete built-in apps from iOS 10. Currently in beta testing, iOS 10 is scheduled to release this fall for the general public.