Apple released beta 2 of iOS 4.1 about a week ago and today they have has released the third beta version of iOS 4.1 to developers for testing. An updated Software Development Kit has also been released to provide developers tools for working with the new beta version. 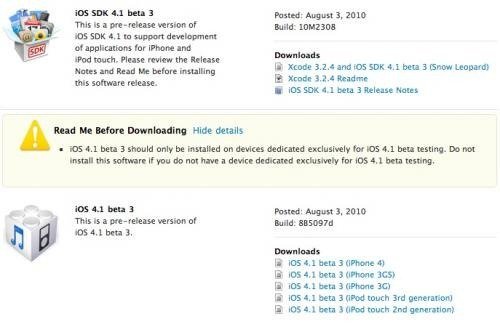 Apple normally releases iOS developer builds in a biweekly cycle but this time they decided to released it a week earlier , maybe because Apple has completed working on it and they are looking to publicly release iOS 4.1 soon. Another reason could be that they had some new changes and Apple wanted to give it to developers as early as possible.

We don’t have much details on the changes of this new beta release but Apple may have fixed some security bugs in it. Also it is noticed that Game Center is no longer supported on iPhone 3G and 2nd generation iPod Touch. One of the most anticipated fixes in iOS 4.1 is iPhone 4’s proximity sensor issue and Apple had announced that they would fix it with the public release of iOS 4.1.