Guys, you must be aware by now that Apple has just released iOS 4.3.5 for iPhone 4, iPhone 3GS, iPod touch 3G/4G, iPad 1 and iPad 2 in order to fix some “security certificate validation” issue. As far as devices which can be jailbroken by Limera1n exploit are concerned, we should see a jailbreak coming from the Dev-Team possibly in the next few hours though it will be tethered like iOS 4.3.4 redsn0w jailbreak. However, you can jailbreak your iPad 2 exclusively with @comex’s recent JailbreakMe 3.0 which, unfortunately, has been permanently blocked by Apple in iOS 4.3.5. 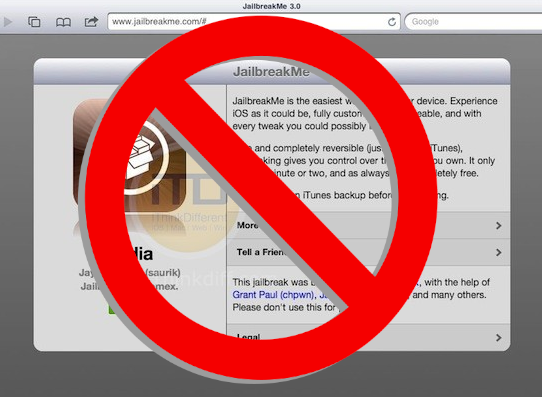 Luckily if you own a jailbroken iPad 2, you should have your iOS 4.3.3 SHSH blobs backed up either offline or on Saurik’s server. So if you accidentally updated to iOS 4.3.5 and now miss your jailbreak, you can downgrade back to iOS 4.3.3 and jailbreak it using JailbreakMe by following these steps. If you own any other iOS device except the iPad 2, you can either wait for a tethered jailbreak from Dev-Team to be announced in the next few hours or simply downgrade and jailbreak on iOS 4.3.4 using this tutorial .

In short, if you haven’t updated yet to iOS 4.3.5 and want to keep the jailbreak, PLEASE DO NOT UPDATE!!