Users would soon be able to jailbreak iOS 8.4.1 if the demo by Pangu team is released. The Pangu team has demoed a working jailbreak, as posted on the popular Chinese social networking website Weibo by the account for HackPwn2015. 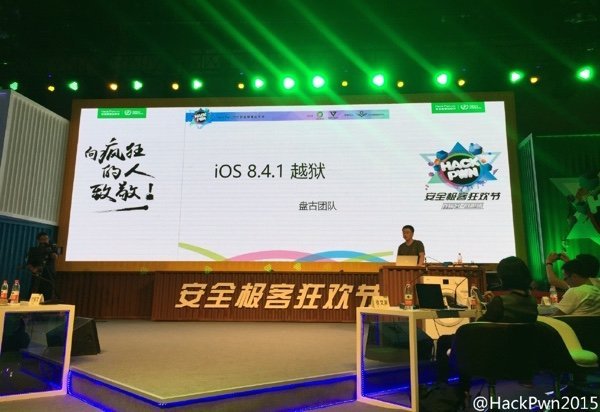 However, it is unlikely that Pangu team will release this jailbreak tool for users. It is a good proof of concept that the jailbreak can be achieved but iOS 9 is just around the corner so it would not be the best thing to release the tool to users and allow Apple to patch the vulnerabilities.

Users who are interested in jailbreaking can downgrade to iOS 8.4 and use Pangu or TaiG tools to jailbreak their iOS device. Apple is still signing  iOS 8.4 so users can download the previous firmware and use iTunes to restore their iPhone, iPad or iPod touch before using any of the above mentioned tools for jailbreak. It is advised that this be done as soon as possible as Apple might stop signing iOS 8.4 builds any day with notice.

We will keep you posted on the latest developments for jailbreak related to iOS.

Update, August 23rd: Apple has stopped signing iOS 8.4 so downgrade would not be possible anymore. If you are already on iOS 8.4, don’t upgrade until there is news on this matter. Users on iOS 8.4.1 who did not downgrade before will be stuck without a jailbreak until and unless there is an update release by TaiG or Pangu.