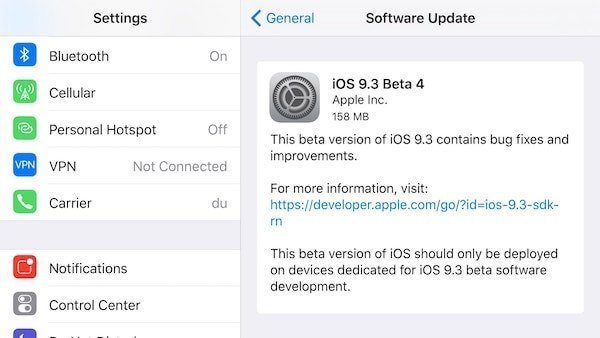 iOS 9.3 is not a minor release, despite its point 1 version number upgrade. The update ships with updates to built in apps such as Health, Notes and News, along with a new Night Shift mode and updates focused towards the education sector. New 3D Touch gestures have also been introduced in iOS 9.3 beta for almost all built in apps.

We will update this post if we find anymore changes.

It is good to see that Apple is continuously working on performance optimizations to iOS 9. The first release was not all that fast on existing iOS 8 devices and was a let down for most users as Apple had promised improved performance all all devices, specially older ones. The improvements still don’t bring it on par with iOS 8 level performance but we’ll take what we can get.

The update is rolling out to all existing iOS 9.3 beta users. If you are a developer registered with Apple Developer Center, you can download the update for your iOS device by going to Settings > General > Software Update. The public beta is not out yet and should be available soon.