The more we dig into how the iPad 2 might eventually turn out to be, the more leaks and surprising revelations begin to surface. We discussed the possibility of Retina display in the iPad 2 yesterday as well as a high likelihood of an SD slot inclusion. Now, a mysterious iPad 2 case has appeared online at MICgadget website which features two new holes, one in the upper left and another in the upper middle. We are yet to unveil the real mystery behind these two new holes but MICgadget seems to have some vague clue. 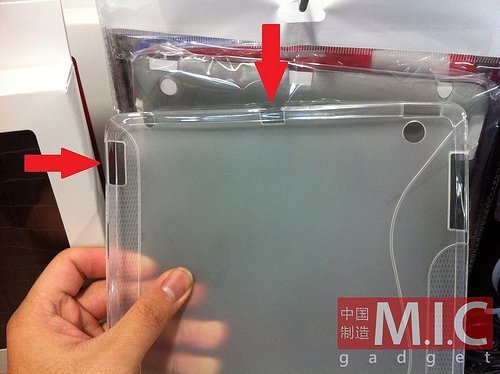 This is what the MICgadget got out of the sales company regarding this new iPad 2 case:

The iPad 2 fits perfectly in this case. When Herman and I heard that, we asked the sales, really? And the sales said, of course! While there are still lots of question marks above our head, we are actually guessing something. The upper-middle hole could be made for HDMI or mini-HDMI port, and the upper-left hole is for SD card slot. Sounds crazy, huh?

Check out the following photo gallery for a closer look: