Folks at engadget have just stumbled across an iPad 2 case at the CES 2011 which contains a machined aluminum iPad 2 mockup inside. The case cutouts reveal a camera hole in the back, another camera hole in the front along with a big speaker hole. The most intriguing thing about the case was a bluetooth keyboard which could magnetically attach to the front cover of the book-like sleeve to bring you a laptop-style setup. The same case can also go keyboard-free if you like it that way. 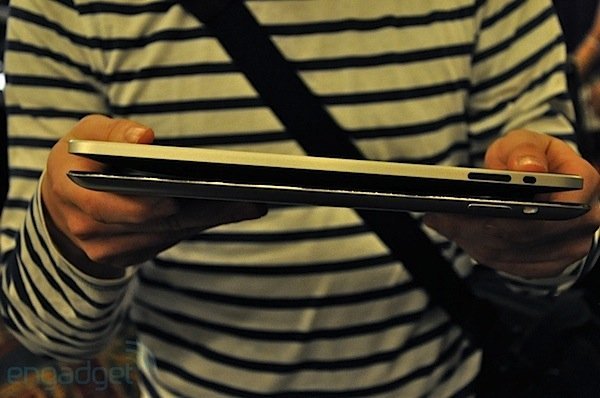 “It was so intriguing that we asked to put our own iPad inside, which is when we were told it wouldn’t fit, since the case was designed for the next iPad. Indeed, the mockup that we found inside the case was a tad bit slimmer than the first-gen iPad, with a taper leading to the edges that reminds us of the iPod touch, and a home button positioned nearer the bottom edge. We found all the typical cutouts on the case, and their mirror on the machined mockup, including a large square for the speaker.”

Check out the pictures gallery below and tell us what you think in the comments section:

Update: Yet more iPad 2 leaks with this same design! Could this be the real iPad 2 hardware at CES?