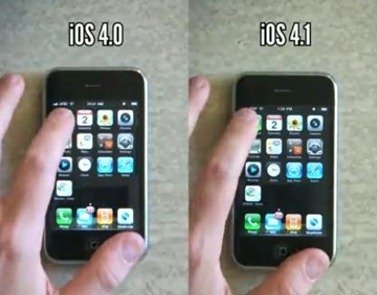 iPhone 3G had really slowed down after iOS 4.0 even though features such as multitasking and home screen wallpapers don’t work on it. To see how slow iPhone 3G has become after iOS 4.0, check out this video comparison: iPhone 3G iOS 3.1.3 vs. iOS 4.0. Apple has promised performance improvements for iPhone 3G in iOS 4.1. The GM build for iOS 4.1 is now available so the guys over at Lifehacker have done a speed test for iPhone 3G by comparing it against iOS 4.0.

The speed improvements aren’t massive but the UI has become much more responsive now. It still can’t compare to iOS 3.x. Don’t fall for this video testing though, it’s far from accurate. However, here are the results they achieved during their testing:

It’s foolish to expect that iOS 4.x on iPhone 3G will get as fast as iOS 3.x. If you really want performance, it’s time for an upgrade. It sucks, but the phone is more than 2 years old and doesn’t even support new features.

iOS 4.1 will be released on September 8th.