iOS 4 (previously iPhone OS 4) has been released to the general public as a free upgrade for iPhone 3G/3GS and iPod Touch 2G/3G models. iPhone 2G and iPod Touch 1G wont get iOS 4 because they’re old and slow. Duh! The update is being rolled out as we speak, so if you’re using an unlocked iPhone, go ahead, connect it to iTunes and the update will show up.

This is probably the biggest OS update ever since iPhone was released back in 2007. It contains new features such as multitasking, iBooks, new developers APIs and much much more. 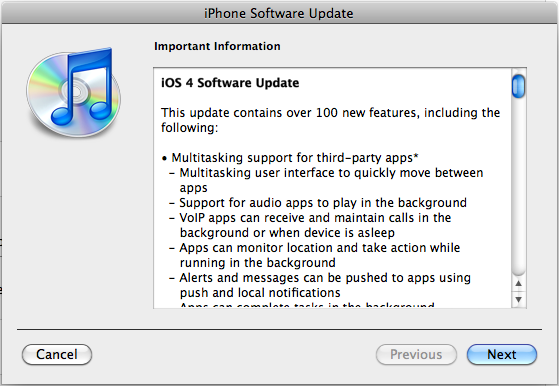 The iOS4 update contains over 100 new features, including the following:
• Multitasking support for third-party apps*
– Multitasking user interface to quickly move between
apps
– Support for audio apps to play in the background
– VoIP apps can receive and maintain calls in the
background or when device is asleep
– Apps can monitor location and take action while
running in the background
– Alerts and messages can be pushed to apps using
push and local notifications
– Apps can complete tasks in the background
• Folders to better organize and access apps
• Home screen Wallpaper*
• Mail improvements
– Unified inbox to view emails from all accounts in one
place
– Fast inbox switching to quickly switch between
different email accounts
– Threaded messages to view multiple emails from the
same conversation
– Attachments can be opened with compatible third-
party apps
– Search results can now be filed or deleted
– Option to select size of photo attachments
– Messages in the Outbox can be edited or deleted
• Support for iBooks and iBookstore (available from the
App Store)
• Photo and Camera improvements
– 5x digital zoom when taking a photo**
– Tap to focus during video recording**
– Ability to sync Faces from iPhoto
– Geo-tagged photos appear on a map in Photos
• Ability to create and edit playlists on device
• Calendar invitations can be sent and accepted wirelessly
with supported CalDAV servers
• Support for MobileMe calendar sharing
• Suggestions and recent searches appear during a web
search
• Searchable SMS/MMS messages**
• Spotlight search can be continued on web and Wikipedia
• Enhanced location privacy
– New Location Services icon in the status bar
– Indication of which apps have requested your location
in the last 24 hours
– Location Services can be toggled on or off for
individual apps
• Automatic spellcheck
• Support for Bluetooth keyboards*
• iPod out to navigate music, podcasts and audiobooks
through an iPod interface with compatible cars
• Support for iTunes gifting of apps
• Wireless notes syncing with IMAP-based mail accounts
• Persistent WiFi connection to receive push notifications*
• New setting for turning on/off cellular data only**
• Option to display the character count while composing
new SMS/MMS**
• Visual Voicemail messages can be kept locally even if
they have been deleted from the server**
• Control to lock portrait orientation*
• Audio playback controls for iPod and third-party audio
apps*
• New languages, dictionaries and keyboards
• Accessibility enhancements*
• Bluetooth improvements
• Better data protection using the device passcode as an
encryption key* (Requires full restore.)
• Support for third-party Mobile Device Management
solutions
• Enables wireless distribution of enterprise applications
• Exchange Server 2010 compatibility
• Support for multiple Exchange ActiveSync accounts
• Support for Juniper Junos Pulse and Cisco AnyConnect
SSL VPN apps (available from the App Store)
• More than 1,500 new developer APIs
• Bug fixes

If you don’t know how to upgrade to iOS 4, here’s a simple guide by Apple on how to do it:

For the adventurous among you, who want to jailbreak/unlock iOS 4 ( the unlock isn’t out yet, but we’ll tell you as soon as it is! ), here are the direct download links for iOS 4 by Apple [via Redmond Pie]

Keep in mind that you’ll need iTunes 9.2 to upgrade to iOS 4. Download iTunes.

Once again, do not upgrade if you use an unlocked and jailbroken iPhone 3G/3GS until there’s a solution available. Don’t say we didn’t warn you!