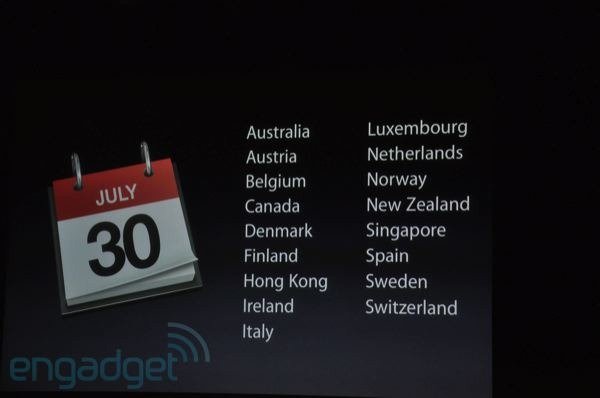 Apple’s iPhone 4 will be available in 17 more countries this Friday, July 30. iPhone 4 features FaceTime, which makes video calling as easy as one tap, Apple’s new Retina display, the highest resolution display ever built into a phone, resulting in stunning text, images and video, and a beautiful all-new design of glass and stainless steel that is the thinnest smartphone in the world.

So, unlike iPad, iPhone 4 will launch internationally on time. iPad had several delays before its international launch probably because of the high sales of iPad, which were more than Apple’s expectations. But this time Apple is ready to provide iPhone 4 on time.

Apple had originally announced that they would launch iPhone 4 in 18 more countries this month but South Korea was omitted due to their government not approving it. As Steve jobs said in the recent press conference:

Also on July 30th, we’re going to bring the iPhone to 17 more countries, with the omission of South Korea. So that’s the update on iPhone 4.

A report also claims that Apple has not even submitted iPhone 4 for approval to the South Korean government yet. Whatever the case is , iPhone 4 is currently launching in 17 more countries and would launch in many more countries in the coming months. But we would not see the white iPhone 4 till later this year because of its manufacturing issues.