Just after the release of JailbreakMe, it took a very little time for a prankster to visit the Apple store and jailbreak an iPhone 4 on display by just visiting the site using its mobile safari browser. Apple may fix this security flow in the coming software update because of which this jailbreak is possible. But for the time being, Apple has figured out a way to stop their iOS devices being jailbreakon on their own turf. 9to5mac reports that when you access JailbreakMe on iOS devices in Apple stores, the DNS forwards users back to Apple.com’s IP address.

Here are some tweets that 9to5mac shared in which users claim this to be true. 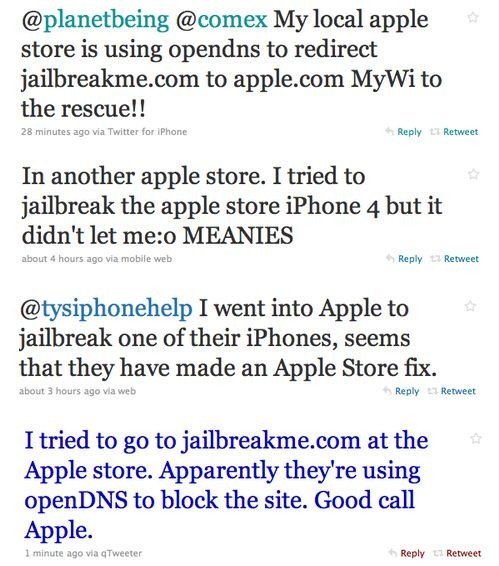 Now, nobody would jailbreak any iOS devices on display in Apple stores. Apple is currently working to fix the iOS 4 PDF security flow and we hope for an update soon which would fix this issue because it can allow hackers to execute malicious code on a iDevices.