Just after the launch of iPhone 4, everybody on the internet was talking about the antenna issues caused by a death grip. Talks about it did not end until Apple called a special press conference which was held to talk about the antenna issues of iPhone 4. They announced that they would give a free bumper case to every iPhone 4 buyer till September 30. Since the press conference, nobody has reported any more issues with the antenna of iPhone 4 as Apple provided every user their free bumper case and those who already had it, got a refund. As it was never really a big problem so Apple has decided that they will not offer a free bumper case with iPhone 4 after September 30 as mentioned on their website. 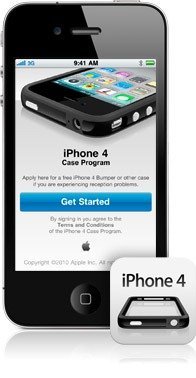 We now know that the iPhone 4 antenna attenuation issue is even smaller than we originally thought. A small percentage of iPhone 4 users need a case, and we want to continue providing them a Bumper case for free. For everyone else, we are discontinuing the free case program on all iPhone 4s sold after September 30, 2010. We are also returning to our normal returns policy for all iPhone 4s sold after September 30. Users experiencing antenna issues should call AppleCare to request a free Bumper case.

Apple may have offered these free cases to cool down the hype that was created by the Internet media. Steve Jobs had mentioned that this antenna problem is almost in every smartphone and it hardly effects calls. If you still want a free case then you should buy an iPhone 4 before the end of this month.