It was last month when we reported that Apple was partnering with technology mogul Nuance, to integrate voice technology into Apple’s newest version of iOS. It is now being confirmed with screenshots that this is in fact true. 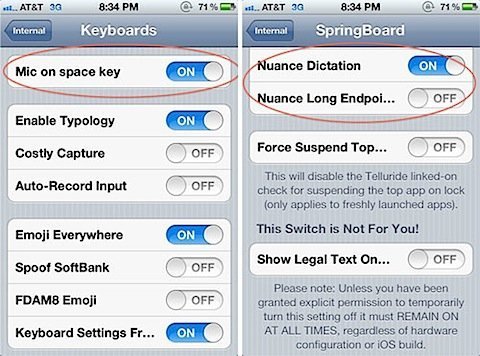 These new setting will allow voice recognition to be used within iOS itself, natively. The above screenshots show the feature of activating the mic on space key, allowing you to begin speaking immediately. Under the springboard settings, you can enable or disable Nuance within the iOS. This will allow users to speak emails, notes, and hopefully SMS messages. Which could come in really handy while driving, especially with all the handsfree laws now.

Now, this version is the internal testing version of iOS, so not all features will appear in the new version as you see them here. However, we can only assume that Apple would be bringing a technology like this to the table, to push competitors harder.

Big thumbs up to Apple for brining this to the new iOS!