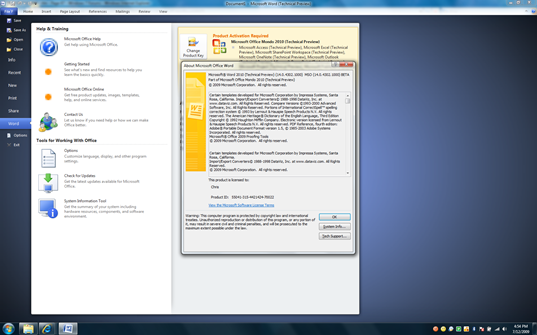 While you’re downloading Windows 7 RTM build 7600, you might as well put Office 2010 Beta in the queue as well because it has been leaked too. Microsoft really needs a plumber to fix these leaks don’t they?

The build number is 14.0.4302.1000 and is the same for both 32 and 64 bit variants. Microsoft might be officially announcing this very same Beta build today at the Microsoft Worldwide Partner Conference along with Office Web applications and Windows 7 RTM.

Meanwhile, you can find more about Office 2010 through the videos that were up at the Office 2010 mini-site, which is not down. You can see it from the Google Cache or catch all the videos at Long Zheng’s blog.