According to recent industry reports, Apple’s upcoming iPhone 13 lineup will feature under-display optical Touch ID alongside Face ID. And a newly-published patent application reveals that Apple is working on the approach it will apply to under-display fingerprint scanning technology.

While most iPhone owners have happily accepted Face ID as the future of privacy, the lack of a fingerprint scanner has irritated some users. However, as per a recently published patent titled “Under-display fingerprint sensing based on off-axis angular light” the beloved fingerprint scanner might be returning with a twist.

In the filing, Apple describes an optical fingerprint sensor that users light, rather than ultrasonic sensors, to decipher a fingerprint. The technology described in the patent helps deal with some of the issues with light-based fingerprint sensors.

The main issue with optical fingerprint scanners is that due to low light input, the fingerprint image may suffer from low contrast which makes it harder to read a fingerprint and increase the time it takes to verify a user. To deal with this issue, Apple discusses a system in which the off-axis angular light is captured through “angle-dependent filtering options between the display and the sensor.” This method may enhance the recognition of fingerprint impressions while preserving the compactness of the complete sensing system.

“For certain objects, oblique light forms stronger imaging signals than light that is normal to the imaging plane. For example, a fingerprint-sensing system/device with multidirectional illumination, such as an under-display fingerprint-sensing device may utilize oblique angular filters to capture the stronger signals to enhance image contrast.” 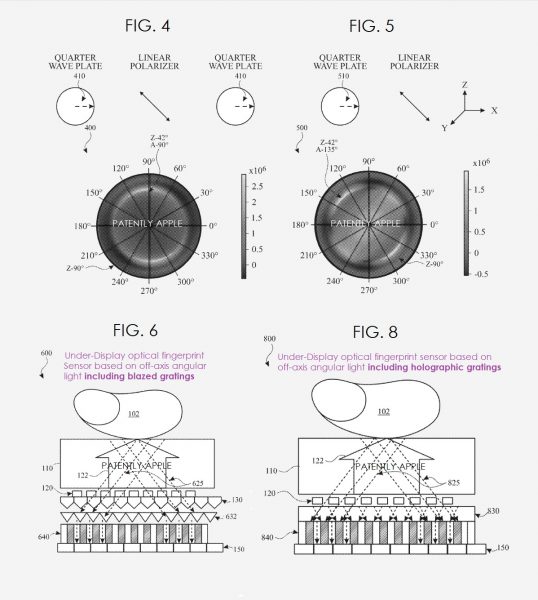 In one implementation of this technology, Apple could use a system that includes “a light-emitting layer covered by a transparent layer and configured to illuminate a surface touching the transparent layer and to allow transmission of reflected light rays from the surface to underlying layers.” Underlying layers in this arrangement could include a grating layer, a collimator layer, and a pixelated image sensor.

All of the methods proposed by help would create an optical fingerprint scanner that could work reliability without taking up too much internal space of a device. It is important to note that Apple files many patent applications weekly, so we do not know for sure if this technology will be implemented in a future Apple device.