Samsung’s original Galaxy Tab is officially shipped with Android 2.2 Froyo which according to the manufacturer, will never receive the advanced tablet specific Android 3.0 Honeycomb update. Instead, the upcoming Samsung Galaxy Tab 10.1 and 8.9 will be released with Honyecomb OS on board. However, Spacemoose1 at XDA has been able to port Android 3.0 Honeycomb successfully on to the original 7″ Galaxy Tab. 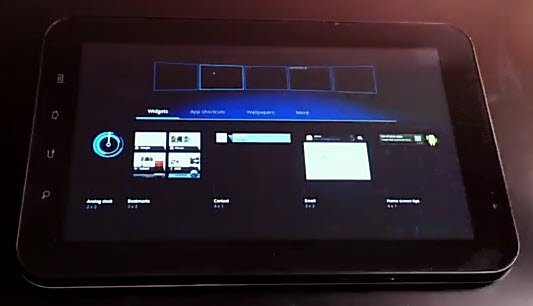 Since the ROM is based on Honeycomb SDK and is still in early developmental phase, it is more of an experimental release than a final one. For now, the experimental Honeycomb ROM is compatible only with the CDMA Galaxy Tab. Some features work perfectly while some don’t work at all like any other experimental release. However if you own a CDMA Galaxy Tab, why not give it a shot. You can visit this thread for a complete tutorial on how to do it. Meanwhile, check out the demo video showing Android Honeycomb 3.0 in action on the 7″ Samsung Galaxy Tab.