According to 9to5Mac, an inside source has tipped them about OS X Lion USB sticks being available and ready to ship from Apple. However, they will cost a whopping $69.99 according to the screenshot given below, which has been provided by the Applecare source. It is basically intended to those OS X customers who haven’t been able to use Lion’s recovery tools as desired. 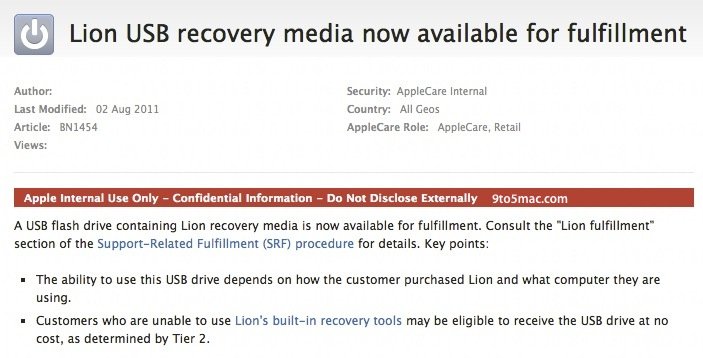 OS Lion is Apple’s latest operating system update marked as version 10.7 It contains tons of improvements and features that have been inspired from Apple’s successful line of iOS devices which include the iPhone, iPod and iPad. The combination of features of iOS and OS X seems to be growing with each release and depending on how you look at it, it’s not a bad thing. Not only does it allow for cross platform access for features, it also makes the learning curve easier for people who shift to the Apple camp through iOS devices. And as we all know, once you get an Apple product, you’re always bound to get another one and the cycle goes on ;)

Well, why would you pay a hefty amount for something you could have for Free? or say, almost Free (if you a spare USB key laying around). Simply check out the following posts and you can have yours in no time, without even having to call Apple!