When Apple announced that iOS 5 will support Over-The-Air updates, I think everyone said “finally!”. Apple is one of the last companies to support OTA updates, with Android doing that since launch. 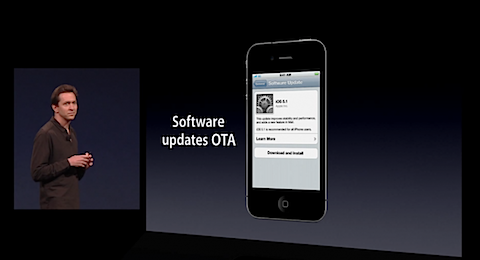 After looking through the SDK for iOS 5, it is apparent that Apple will allow OTA updates over WiFi or 3G. However, we are also assuming that this will be carrier specific and may not work for major updates. Since the updates will likely be 500-800MB, some carriers may not want millions of people downloading a 500MB file at once. AT&T’s network may come to a halt. Also, Apple will be doing Delta updates, allowing minor updates to be hopefully under 100MB or at least 200MB. If that is the case, 3G would be acceptable. If it’s a major update, ie 500-800MB, WiFi may be required.

We will have to wait until iOS 5 is released to see how they handle the traffic and whether or not all updates will support 3G.