If you are facing a tough time in finding a certain kind of Pokemon and are tired of catching the same one several times, worry no more. Poke Radar app by Braydon Batungbacal and Nick DiVona lets you track Pokemon anywhere in the world found by other players.

Poke Radar is a Pokemon Go community driven app which shows you the locations of rare or specific Pokemon in your town, city, country and around the globe. Pokemon Go requires you to leave the comfort of home and set out in the real-world to capture Pokemon, therefore, Poke Radar lets you embark on a focused search by telling you which Pokemon to find where. 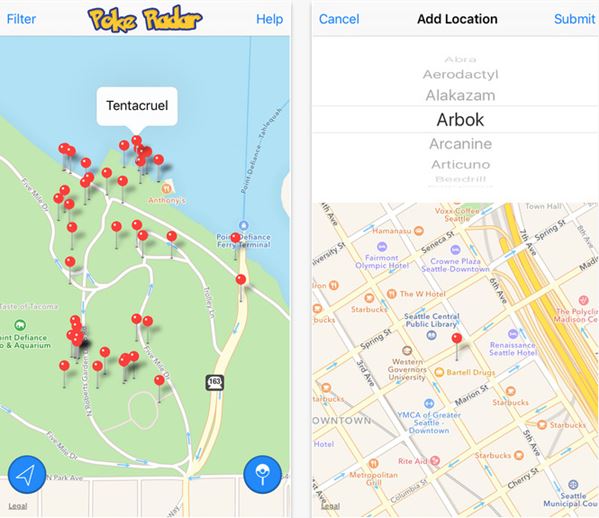 In the app, Pokemon trainers from around the world, after catching rare Pokemon at a spot, share that location by plotting it on Google Maps. This way, the location is known to all and makes the hunt to capture rare Pokemon a lot easier. If you want to look for a specific kind of Pokemon only and not be bombarded with all kinds of them, you can set a filter to find them. Since the app keeps a time log of when a trainer found a Pokemon (day or night), you can use that information to weigh the chances of certain Pokemon’s appearance.

Since Poke Radar is a community driven app, it can also allow people to plot hoax locations in mischief but, fortunately, there are ways to identify hoax locations. Every shared location or tip has an up or down vote option. The more up votes a location has, the more reliable that tip is. You can also tap on the Pokemon icon to know the name of the trainer posting the location, and search how many locations that trainer has shared and how useful were they for others.

Poke Radar is a great finding tool for Pokemon trainers and has received encouraging reviews. As announced on iTunes, the app will soon have an iOS 8 version, the option to remove location pins, and an improved UI.

Poke Radar is available in the App store for free and currently requires iOS 9.3 and later. The web version can be accessed at www.pokeradar.io

Check out our Pokemon Go guide for tips and tricks to get started!