Even though 6% is not a small decline, it is still an improvement when compared to the 20% drop in Q1 2020 and Q2 2020 smartphone sales numbers. Even though manufacturers have continued to announce new smartphones with 5G networking, consumer spending trends show that they have been spending less money on these devices due to the on-going COVID-19 pandemic.

Samsung continued to lead in terms of smartphone unit sales and market share, followed by Huawei. Due to Apple’s decline in unit sales, and delayed iPhone 12 launch, Xiaomi was able to overtake the company and move to number 3. 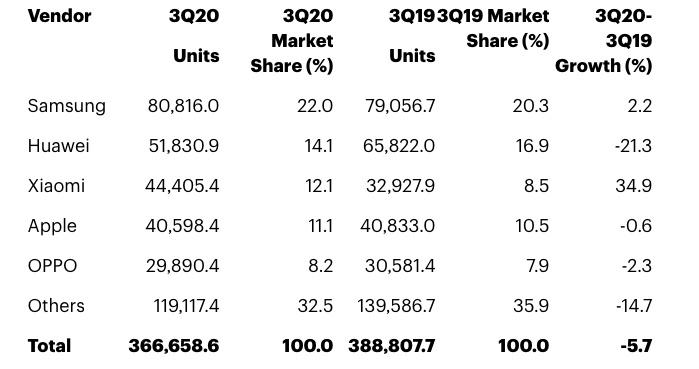 “Consumers are limiting their discretionary spend even as some lockdown conditions have started to improve. Global smartphone sales experienced moderate growth from the second quarter of 2020 to the third quarter. This was due to pent-up demand from previous quarters.”

There were some encouraging numbers this year. Smartphone sales increased in a few markets, including India, Indonesia, and Brazil, while Samsung and Xiaomi showed positive growth for the first time this year.

“Early signs of recovery can be seen in a few markets, including parts of mature Asia/Pacific and Latin America. Near normal conditions in China improved smartphone production to fill in the supply gap in the third quarter which benefited sales to some extent. For the first time this year, smartphone sales to end users in three of the top five markets i.e., India, Indonesia and Brazil increased, growing 9.3%, 8.5% and 3.3%, respectively.”

Apple was unable to show any positive year-over-year growth, despite the introduction of its cheap iPhone SE model. Apple sold 40.5 million units and saw a decline of 0.6% in sales. The late and staggered launch of iPhone 12 models also contributed to a decline in Apple’s unit sales, which it should be able to make up for in Q4 2020 results, which will come out in January.