Steve Wozniak was one of the co-founders of Apple along with Steve Jobs and Ronald Wayne. He is not just a great engineer but he is also known for his good sense of humor. And after Gray Powell’s case of the the lost iPhone prototype, Steve Wozniak could not stop himself from making a joke of this scene.

He has shared a picture which was in his jokes list, in which he is drinking beer or pretending to drink and has an iPhone in his hand. With this he is wearing a shirt with a funny sentence written on it.

I went drinking with Gray Powell and all I got was a lousy iPhone prototype. 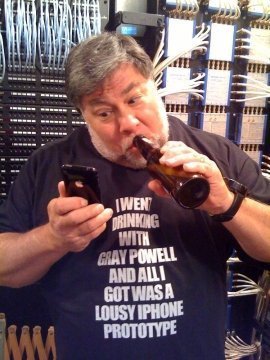 Wozniak can surely see the funny side of this thing, but still he understands the position of Gray Powell currently and says he would have laughed if this very thing would have happened to him, as he wrote to his friend, Dan Sokol.

I’d laugh if the same thing were done to me.

Dan Sokol was the one who shared this picture with CNET and here’s what he had to say:

He sent the photos to his joke [e-mail] list. I laughed for five minutes after looking at those pictures…I’m sure (Woz) has sympathy (for Powell). It could happen to anyone.