Earlier today Verbs (the infamous new iPhone chat app) announced a new update to their app which would be available soon. According to a reply, the update will be available in about a week, hopefully. 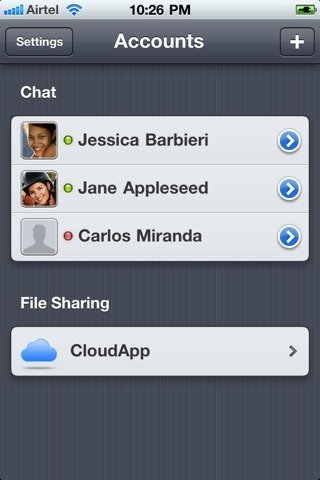 If you remember, when Verbs first arrived it only had Google Talk and CloudApp support. It felt rushed and unfinished with no local notifications. That felt like a rip off. Prior to knowing this, I purchased it and was left with a bad taste in my mouth. Soon thereafter came an update to handle local notifications and a few bug fixes. Besides the need for more instant messaging services, there is still a major fix needed. I’m not sure if it’s a multitasking issue or just a ‘connection bug’ issue, but when you leave the app for an extended period of time, it disconnects. Sometimes I have to exit the app completely (including from the switcher) and restart in order to reconnect.

All that aside, Verbs is introducing AIM and MobileMe support as well as Droplr for file support. Personally, I hope this will be smooth and grand. They have quite the potential and I’d love to see healthy competition with the upcoming iM app. Knowing who the developer and designer are makes this even harder for Verbs, in my opinion.

Verbs is aesthetically pleasing with Retina graphics and a easy to use and simply designed UI. As a matter of fact, I like it. It does what is advertised and as a man, that’s my core. So, I say keep up the good work because it seems your intentions are all in the right place. Verbs can be downloaded for a price of $2.99 from the app store!

I'm a 25 year old (married) tech monster. Eat, sleep, and breathe tech. I love my family the most. I'm proud to say I'm an Apple fan but will give any piece of equipment a fair shot. Always open to hear both sides of any story and willing to test as many theories as I can.