Apple has released watchOS 4.3 for all Apple Watch models ranging from series 0 to series 3. The major new update ships with an updated and smarter Siri watchface, a new charging animation and a portrait nightstand mode. The update also brings back iPhone music playback controls which Apple had removed from previous watchOS 4 releases. It also includes fixes for a bunch of security vulnerabilities and bugs. 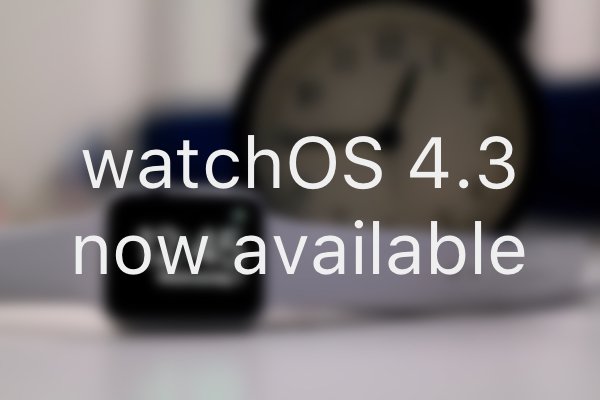 Personally, I love the new Siri watchface as it surfaces a lot more information than before. I’m sure that if and when Apple opens it up to third party app developers, it will become even more useful. It will be great to see the latest Twitter mentions, or Slack messages right in the Siri watchface. The re-inclusion of Apple Watch music controls is also a welcome addition, however, it is still not flawless. For example, if you go to an artist’s albums list and press the Shuffle all button, it shuffles all your music, instead of just that artist’s albums.

If you have not received the update yet on your Apple Watch, open the Watch app on your iPhone and go to General > Software Update. You should get the update. Make sure that you are connected to the same WiFi network as your Apple Watch and that your Watch is placed on the charger. The update takes a long time so it’s best to do it when you don’t have to use it.

After using watchOS 4.3 for almost a day on my series 0 Apple Watch, I can confirm that the update includes a ton of performance fixes. Animations and transitions are much faster, no matter you are on a watch face, apps menu or in an app. Apps like Workouts also launch faster and work. With the previous update, Workouts app had become all but useless as it was slow as hell to load. Quick replies, emojis and Scribble keyboard have also become useable again and do not slow down like before. It’s too early for me to comment on the battery life but it is good to see that Apple has focused on improving the performance across all devices with their latest operating system updates. I have noticed similar improvements in iOS 11.3 and macOS 10.13.4

Let’s hope that Apple continues this trend and at WWDC 2018, they announce further improvements to core performance and bug fixes across all devices.