Usage is very simple. Download these apps, run them and pin them to the taskbar.

Along with the resource utilization, both these apps show quick links to the Task Manager and the Resource Monitor in Windows 7. 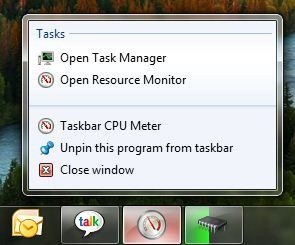 A few different settings are available such as update frequency and the thresholds for yellow and red states. 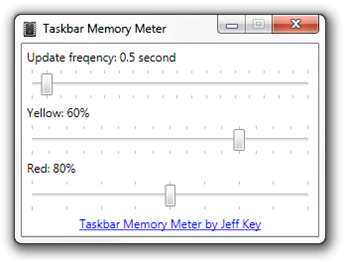 While, these apps might not replace the CPU meter gadget in the Windows 7 Gadgets, these are a good demo of the possibilities with the new taskbar. You don’t have to minimize windows or bring gadgets to the top to check out the resource usage with these apps as well, which is a big advantage. Now only if they could show the resource usage in numerical values as well on the buttons. I wonder if that’s possible.

Check out these Windows 7 utilities as well : c2iGmailNotifier and Gmail Notifier Plus