We have all been talking for or against the iPad ever since it was announced. Some people were so disappointed and in denial, they went on to say that Apple still has another tablet in the works which will run OS X. While others like Josh Gruber say about iPad haters that they don’t ‘get it’. Whatever your opinion may be, the best feature of the iPad is its software, whether you like it or not. Despite not having multi-tasking and Flash support, it is still miles ahead of other competing tablet operating systems out there. It provides a better finger-touch friendly UI than Windows 7, better apps than Android and is better in every sense than all the Linux distros out there.

Let’s just focus on the best part of the iPad – Apps. I use an Android phone currently, and what disappoints me the most is that it doesn’t have many apps from big companies. Companies like EA, CNN, Nike, New York Times and much more have their apps in the Apple’s App Store. No other platform has attracted such ‘mainstream’ attraction, and it’ll be difficult for competitors to successfully copy Apple.

[quote]Microsoft has tried to shift focus away from apps with the reveal of Windows Phone 7 Series. Data-centric is the keyword for the new mobile OS. They didn’t even demo a single 3rd party app. The ‘live tiles’ and ‘hubs’ are great new ways of consuming data, but where will this data come from? There will be apps which utilize these new functionalities of the OS. But, looking at the current state of Windows Mobile 6.5, apps aren’t something it can boast about. Especially against the quality apps and big names Apple has amassed in the App Store. Yes, there are useless apps, tons of them in the App Store, but there are more than enough choices for each kind of productive and entertaining app. 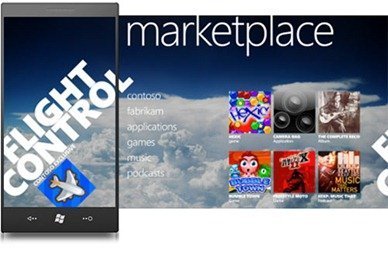 Going by the pleasant surprise that the announcement of Windows Phone 7 Series has been so far, I’m sure Microsoft have done enough homework on the development platform strategy. They have enough resources and resolve to overcome the competition whether in search, operating systems or the cloud. All it takes is time and patience. Just like the Xbox 360 against PS3, Windows vs. Macs, Windows 7 after Windows Vista, this could go down as another notch on Microsoft’s belt. If anyone can beat the iPhone, it won’t be a future iPhone, but it will very likely be Microsoft.