Google has give its YouTube app for iPhone and iPad a fresh redesign based on the material design language. Almost every nook and corner of the app has been touched up and looks fresh. But, instead of improving the app experience, Google has taken many steps back with the YouTube app.

The app now has a new video editing tool with trimming controls. The app is now divided into three main sections: home, subscriptions and account. This is the same for both iPhone and iPad so Google does not take advantage of the additional space available on the larger screen.

When you look at a channel, below is what you will normally see. A lot of nothing on the top, followed by the navigation, large cover photo and more wasted space. Even on the iPhone, you can see on the home screen that the space could have been utilised more efficiently. 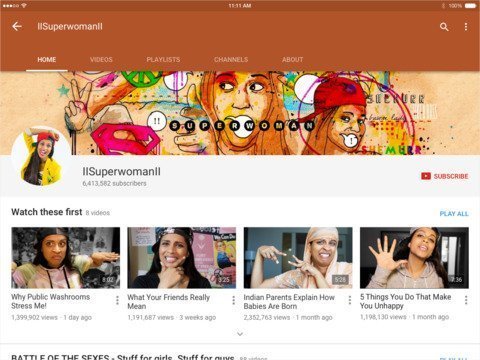 The subscriptions page has a new control which lists the channels in rounded buttons which you can swipe left and right on. Tap any of these buttons and you go straight to that channel. The dots under each button appear when the channel has new videos. Tapping on the arrow on the right of this control takes you to a list view which shows all the channels. We can’t say that we like this new control as it’s difficult to tell which channel is which thanks to no text with the buttons. Meanwhile, the list is easier to use and navigate.

iOS 9 users do not get any multitasking features on iPad i.e. no split view, slide over or picture in picture.

It seems that the YouTube is just stretched for the bigger screen, just like the new Twitter app for iPad. This new trend really hurts user experience and a larger screen deserves its own proper design rather than an enlarged one carried over from a smaller screen. Tweetbot 4 is good inspiration for how it should be done.