After ages of waiting for iPad users, Tweetbot 4 is finally out. The update is a universal app for iOS which means that iPhone and iPad now have the same design and feature set. Tweetbot 4 now has a landscape mode, statistics and activity views, split column view, split view multitasking on iPad and much more.

The user interface has received an overhaul on both iPhone and iPad. When you start the new app on iPhone, it will be immediately obvious that almost every nook and corner of the app has been updated. 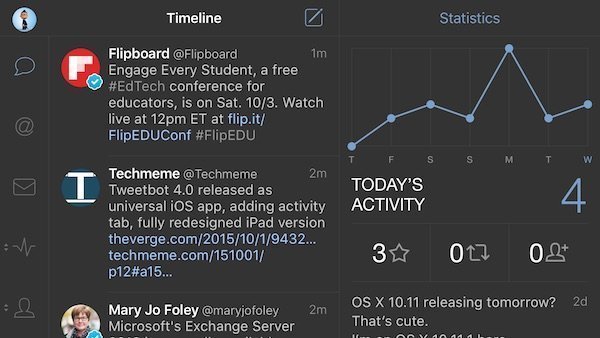 Tweet detail, profile show more information now. They also load faster than before and almost all animations are instantaneous. Tweet composer also has a new image picker. Gone is the ‘use last photo taken’ option as you can see a filmstrip view of recent photos like iMessage. My personal gripe with disabling location has also been fixed. Simply tap the location button and you can easily disable location.

Users can also reply to tweets right from notifications, thanks to Apple opening up this feature third party developers in iOS 9. Muting hashtags, users or apps is still there and works well.

iPad users can also take advantage of Split View multitasking. I imagine this is how most users will use Tweetbot on iPads.

Despite all these new features, there is no mention of 3D Touch for iPhone 6s or an Apple Watch. Perhaps Tapbots will make us wait for 2016 for them? =)

Even though it is expensive compared to other options, Tweetbot 4 is must have app for Twitter power users. Highly recommended!

Update: it turns out that you can reply to mentions or direct messages from your Apple Watch thanks to iOS 9’s quick reply feature

TIL (yes literally today) I learned that you can reply to mentions/DMs on your watch from Tweetbot thanks to iOS 9’s Quick Reply.