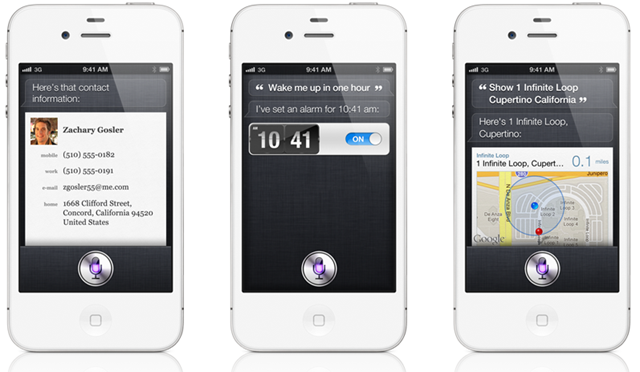 No matter how you look at it, Apple has changed the mobile landscape once again with Siri, the digital assistant that understands natural language and the context of the conversation. It’s only after Siri was launched on the iPhone 4S, alternates started popping up on competing platforms such as Android and Windows Phone 7. But, no surprises there when you realize that none of them are even close to what Siri offers in terms of intelligence and integration with iOS.

Still, in beta, Siri has been shown off in ads previously as well by Apple. So showing how Apple knows Siri is the future, they’ve published two new commercials on YouTube showing Siri’s navigational capabilities as well as how it can help one polish their talents and become a rock star.

Siri not only lets you find locations on a map and places near you, it also lets  you find out what the weather is, sends and read incoming text messages and emails, makes phone calls, set reminders and calendar events, find information on the web and Wolfram Alpha and much more. Check out both advertisements below:

This commercial shows a young man buying a guitar, learning chords, inviting friends over for a gig and telling his iPhone to call him ‘rock god’ all through Siri.

Road trip shows how Siri helps friends navigate through a road trip, find out about their points of interest and information about them and even find out where they are all with just voice interaction.

Apple might expand the capabilities of Siri with their next iOS release, iOS 5.1. We expect Apple to introduce maps navigation through Siri someday down the road as it’s one of the features that its still missing out on when compared to Android which ships with the free Google Maps Navigation software. Apart from that, Apple could do great by officially opening up the API to third party developers. Some developers are already doing wonderful stuff through Cydia by making translator tweaks, providing Twitter integration and much more.

No matter how long these things would take, Apple is bound to keep making Siri more amazing.