Apple tends to make really good ads sometimes but they have really outdone themselves with this one. Their new ad featuring Cookie Monster is one of the best ads they have made for Siri. 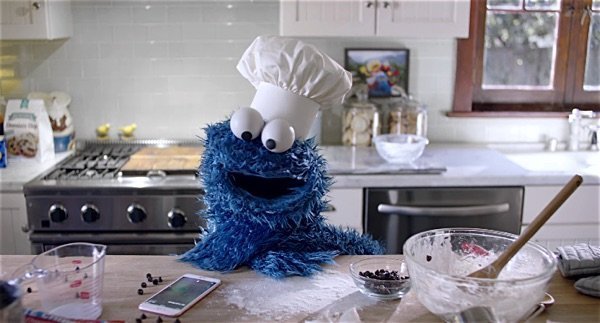 Apple posted the ad a few days ago which showed Cookie Monster using Siri to set a timer when baking cookies. He also uses Siri to start a ‘waiting’ playlist on iPhone 6s, while the cookies get ready. The ad basically shows off the hands free Hey Siri feature in iPhone 6s and 6s Plus. The dialogues and reactions by Cookie Monster in the ad are absolutely delightful and helped the ad reach the top charts of viral content.

However, Apple did not stop here. They posted another video featuring outtakes with Sesame Street’s Cookie Monster which is even better than the first video. It features some ‘behind the scenes’ footage which shows Cookie Monster interacting with Siri and doing all sorts of funny and cute things. The best line from the ads has to be ‘me wish me could close me eyes’.

Apple has been known to feature celebrities in their ads such as Jamie Foxx, Stephen Curry and more. Meanwhile, Microsoft’s ads (along with other competitors) also feature Apple’s products which counts as free marketing for the Cupertino.

Apple sure knows how to create great commercials. Something Microsoft should really learn.