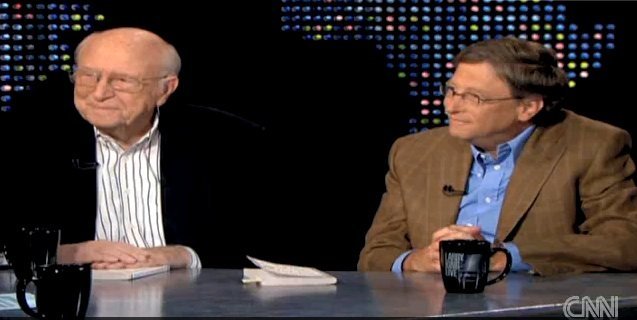 Bill Gates hasn’t made an appearance this time at the D8 conference like Steve Jobs or Steve Ballmer, but he was interviewed on Larry King Live on CNN. He was with his father, Bill Gates Sr. The conversations were really interesting and ranged from Facebook to recession, Gulf oil spill to Apple and his ties with Steve Jobs.

Bill Gates had some optimistic things to say on the current recession. About, Steve Jobs, he said he enjoyed sparring with him and also praised him. He mentioned the times he worked with him as well. One thing I disagree with Bill Gates on is his opinion on the iPad. He’s unsure about it because it doesn’t have voice and pen input while I think it’s not the use cases that the iPad has been created to serve. Microsoft hasn’t been able to bring pen and voice input to the masses in a way that it replaces conventional notebooks for them while on the other hand, at least the iPad has been able to gain attraction from the masses.

No matter how you look at it, Bill Gates has been one of the greatest innovators in the world and changed personal computing as we know it. Nowadays when people talk about the conventional PC as almost being obsolete, we still have a lot of dependencies on these machines and desktop software, if not anything else but to design and create the experiences for new form factors such as smartphones and tablets.

Enough praising, check out the interview for yourself.

On Apple and Steve Jobs