Legendary iOS hacker @Comex, the same genius who brought us the first ever iPad 2 jailbreak tool aka JailbreakMe 3.0 and keeps a tremendous track record of releasing other userland jailbreaks e.g Spirit, tweeted a pretty strange link yesterday and asked his followers to visit that link on an iOS device using Mobile Safari. He tweeted the following two links:

Of course, nobody knew what he meant at first but soon it became clear that he was trying to entertain the world, will sort of. He actually shared a couple of interesting bugs he had recently discovered in iOS, the so-called safest and most reliable mobile operating system. It’s not like we don’t agree with Apple here, but looking at these glitches definitely shows the iOS is still far from perfect. Anyhow, let’s take a look at what these two links do!

The first URL is actually pretty cool. If you type  facetime-accept://*  in your mobile safari and hit Go, a fake incoming FaceTime call is launched. What makes it real fun is if you just replace the * with a name of your choice, it will show an incoming FaceTime call with that name. Take a look at the screenshot below and you’ll know what I mean! *wink* 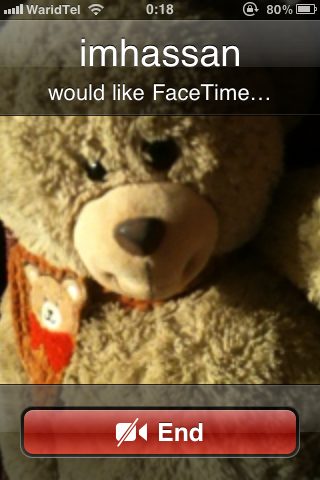 ** Please note that this works only on devices which are FaceTime-compatible and are running iOS 4.x.

The second URL tellock:// points at another glitch in iOS. When you punch it in your mobile safari’s address bar, it will force your iPhone / iPod to a lock screen at once. But unlike a regular lock screen, you don’t need to “slide to unlock“, rather a simple press of home button unlocks the device. This one isn’t much of a big deal or even much fun for that matter, but it does uncover yet another iOS bug.

I’ve tried both these URLs on my iPhone running iOS 5 beta 5 and it seems to have been fixed since I can neither fake a FaceTime call on it nor can I force an instant screen lock, meaning Apple got to these before we even realized!