Among the 200+ new features that have been introduced in iOS 5, iMessage is definitely one of the best executed ones. It is incorporated seamlessly within the messages app and lets you send free text messages, photos and even videos to all other iPhone, iPod touch and iPad users running iOS 5 via Apple’s push notifications service, much like the Blackberry’s instant messenger. It even shows you delivery and read receipts as well as updates in real time as the other person is typing a message. 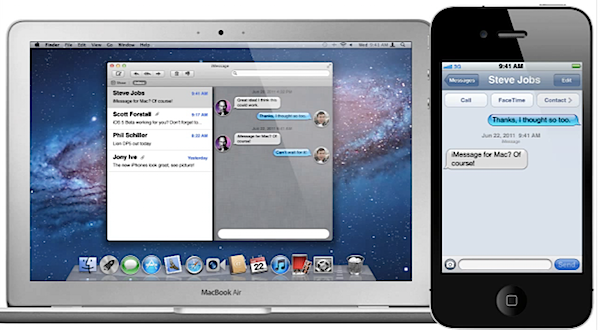 Interestingly, a designer named Jan-Michael Carthas has created a a concept iMessage app for Mac OS X Lion, which he supposes may be available in Mac App Store for $0.99 just like FaceTime for Mac. If this were to come true, a systemwide integration of iMessage would be a great tool for iOS + Mac OS users allowing them to send instant text messages as well as initiate a FaceTime call with a contact directly from the Address book.

Check out the concept video of iMessage for Mac OS X Lion embedded below: