This just in! iOS 4.3 is set to release for iPhone 3GS/4, iPod Touch 3G/4G, iPad and iPad 2 at 10AM PST today according to BGR’s sources. iOS 4.3 will bring Air Play support to third party apps, hardware rotation lock/mute switch option as well as Personal Hotspot amongst others. Check our our detailed list of new features in iOS 4.3 here. 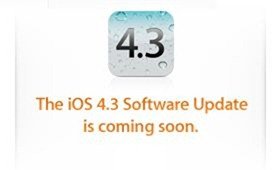 Of course, if you use an unlocked iPhone, don’t upgrade as soon as you get the notification in iTunes. The iPhone Dev Team had confirmed an unlock after iOS 4.3 is released so wait until we give the green signal. We will also be waiting for the jailbreak tools such as redsn0w and greenpois0n to be updated before the unlock is released. Stay tuned!