iOS 4.3 beta 1 was dropped by Apple a couple of days back that has brought a handful of new features to the iOS. Meanwhile, lots of “digging” has been going on into the iOS 4.3 SDK that has revealed some interesting facts. Folks at 9to5Mac have discovered some files in the latest SDK which strongly suggest that iPad 2 will be getting a second camera at the back in addition to the front-facing FaceTime camera. They have basically extracted some shutter screens and camera / video icons similar to the ones found in camera app of iPhone and iPod touch as pictured in the screenshot below. 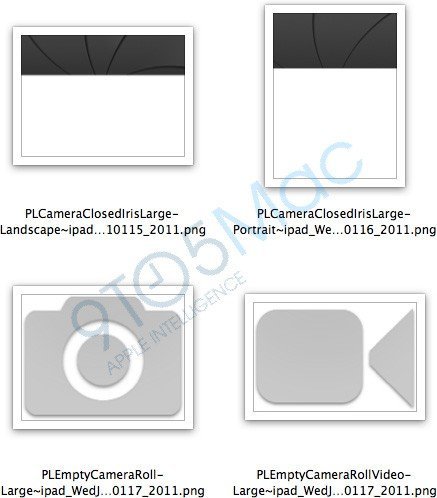 Unfortunately, the screens are found to be of 1024 x 768 resolution which points to “No Retina support” for iPad 2 so far. The only possible hint we could have got for a Retina display in next-gen iPad was if they had found 2530 x 1897 resolution shutter screens instead and that too for a supposed 9.7-inch iPad which quite frankly, is highly unlikely at this point!

We found four interesting files in the latest SDK and they all amount to the next-generation iPad having a camera. You will notice the same shutter screen as found on the iPhone and iPod touch in addition to camera roll icons for videos and pictures. We opened up the camera shutter images and the size is 1024 x 768, which is the same resolution as the current iPad. No higher-resolution screen on iPad 2?