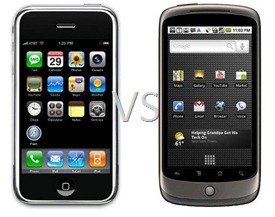 Let’s face it. The Nexus One has to be compared to the iPhone 3GS, whether you like it or not. Even though Google didn’t hype it as an iPhone killer ( but we bloggers did! ), the superphone is a challenger to the iPhone. Specifications-wise, it beats the crap out of the iPhone, which still carries a 3-year-old screen with low resolution and size and a relatively ‘boring’, uncustomizable UI and somewhat outdated OS ( no Facebook integration, widgets, and the likes), but with more than 100,000 apps, one can easily overlook these ‘drawbacks’. On the other hand, the Nexus One has a 1GHz processor, a larger and better display and way better battery life than the iPhone 3GS.

Technobuffalo is one of my favorite tech reviewers on YouTube. They’ve done a comparison of the browsing speed, text correction and editing, customization options, navigation, apps, maps and other features between the 2 phones. While the good old iPhone 3GS does edge out in certain areas like text editing and correction and apps, the Nexus One beats the iPhone 3GS in browsing ( it loads websites way faster thanks to the 1 GHz processor), maps and customization. No camera comparisons in the video, though.

The Nexus One is definitely the phone that puts up stiff competition against the iPhone. If you’re confused between buying the iPhone 3GS or the Nexus One, this video should help you out. Even if it doesn’t help you decide, you could wait for the iPhone 4G this summer. I know I won’t, it’s Nexus One for me!