Apple shared some really interesting facts in their press conference on Friday. A lot of Apple fans are satisfied after the conference, although, in reality, most users were already satisfied and only a few users were having real issues with iPhone 4. Apple shared the statistics of dropped call rate on iPhone 4 and interestingly the percentage is greater than on iPhone 3GS. Apple claims that the antenna design of iPhone 4 is better than previous version of iPhones but due to some reason the drop call rate of iPhone 4 is less than one percent greater than iPhone 3GS. 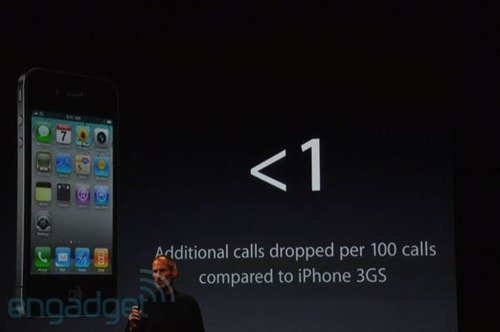 This is hard data… the iPhone 4 drops less than one additional call per 100 than the 3GS. Less than one

Apple is not sure why iPhone 4 even has this little margin of drop call rate greater than iPhone 3GS but Steve Jobs has his own theory about this:

When the 3GS came out, we didn’t change the design from the 3G. So there were already lots of cases out there for the phone. And more than 80% of new buyers left the store with a case. Now the new phone doesn’t fit those cases, and we can’t make these bumpers fast enough, so only 20% leave the store with a case… but we’re going to figure it out.

This theory sounds correct because iPhone 4 cases and bumpers almost fully solve this problem. Probably because of the same design as its previous generations, many iPhone 3GS users already had cases or bumpers and had better call drop rates. If this theory is true, the call drop rate should further decrease when iPhone 4 users would get their free iPhone 4 case.