iPhone 7’s A10 Fusion SoC has been confirmed to have 2 processors running at 2.33 GHz while iPhone 7 plus contains 3GB RAM. As per the benchmarks posted to Geekbench, this combination makes it faster than even the iPad Pro, which has an A9X chip clocked at 2.25 GHz and 4GB RAM. iPad Pro was already faster than Intel’s Core i5 processors from 2013 so the new iPhone 7 is really fast.

Before launch, iPhone 7 plus benchmarks had leaked which showed similar numbers, albeit with lower single-core and higher multi-core numbers. iPhone 9,4 is the iPhone 7 plus identifier which was a bit confusing since there are only two iPhone 7 models but there was a ‘4’ in the model identifier. 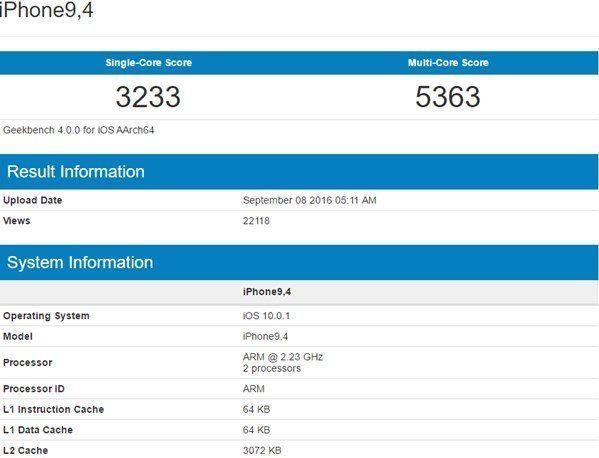 As per leaked reports, the A10 chip was to be clocked at 2.5 GHz but as per the benchmark results, the 2 processor cores run at 2.33 GHz each. iPhone 7’s A10 Fusion system-on-chip actually has 4 cores, 2 of which are low power cores to handle background tasks, assigned automatically by a hardware controller. The low power cores run at 1/5 the power of the high-performance cores. Geekbench does not detect those in the test results which confirms that they are not used for tasks or apps which require power. In this case, this would be the processing power required to go through the benchmarking tests.

The Geekbench result also confirms that iPhone 7 plus has 3GB RAM, while iPhone 7 has 2GB RAM. The reason for additional 1GB RAM is likely that the plus model has to push more pixels. It also has dual cameras which will likely make use of the additional memory, especially when using Portrait mode.

As per Apple, A10 Fusion performs 40% faster than A9 found in iPhone 6s. During their announcement, they did not compare the benchmarks to iPad Pro to show that it’s their fastest iOS device ever. iPad Pro 12″ scores 3010 and 4882 in Geekbench. This means that iPhone 7’s A10 Fusion SoC is faster than many Intel Core i5 processor’s from a few years back.