As it is quite clear from a recent tweet (above) by Chronic Dev Team’s MuscleNerd, that the highly anticipated jailbreak for Apple TV 2G With Pwnage Tool is going to be released this Sunday, the “Funday” as he likes to call it. However since there are no Apple TV jailbreak apps available for us to try, developers need to release a few applications before the announced ETA. We already posted a week back regarding the ongoing development of Apple TV jailbreak apps. You can read about it here.

Meanwhile, in another tweet (below) followed by the previous one, MuscleNerd again gave us a heads-up regarding the unlock for iOS4.1 on iPhone 4 and iPhone 3G(S). He said that the recently found exploitable baseband crash (05.14.02 & 2.10.4) is almost ready but has been delayed till the release of iOS4.2 which is due to be announced in November by Apple for all iOS devices including the iPad which will get multitasking and folders capability for the first time. 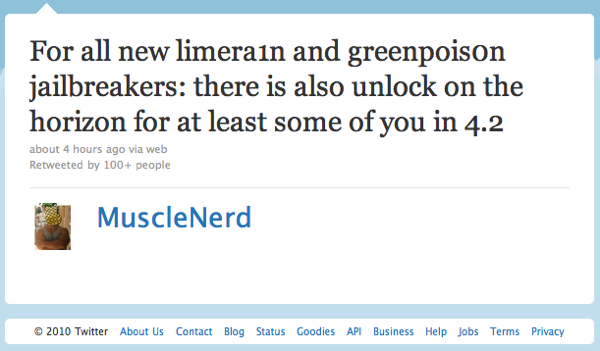 This is all for now. Stay tuned for more breaking updates on our website,Twitterand Facebook regarding the release of pwnage tool to jaibreak Apple TV 2G and unlock for new basebands!