Yesterday, Microsoft finally launched Windows Phone 7 and with that HTC, Samsung, LG and Dell also revealed their Windows Phone 7 devices. Just like Android phones, users would have a choice for their WP7 phone according to their taste. Some of these phones also have physical keyboards for those who don’t like the touch keyboard that much. 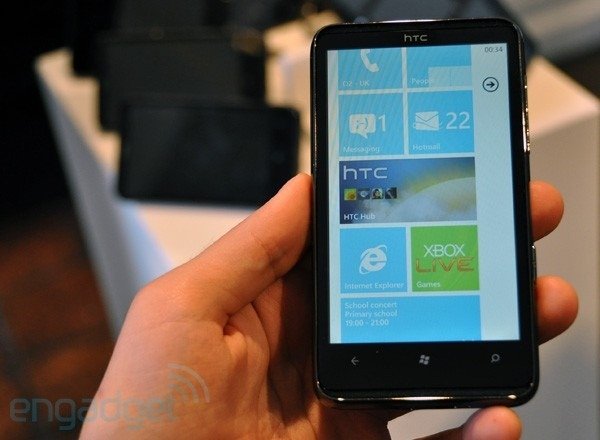 Well, the specs of most the WP7 devices are same as most of them have 512MB RAM, 8GB or 16GB storage, 5MP camera and 1GHz processor. But each device has its unique look and feel and some different features from other devices.

Looking at the HTC’s WP7 phones, we can say that they have a look similar to HTC’s Android phones. HTC HD 7 resembles the HTC HD 2 Windows Mobile phone a lot. HD 7 is one of the most amazing Windows phones unveiled so far. It has a 4.3 inch display, 512MB RAM and HD video recording with its 5MP camera.

Mozart is the smallest HTC WP7 device but this does not mean that it has lesser features. It has a 3.7 inch screen and its specs are just like other WP7 devices but it has a 8MP camera which is better than any other WP 7 device. The aluminum body of HTC 7 Mozart also looks pretty.

Trophy looks like the cheapest Phone from the HTC Windows Phone 7 devices as the device has no different feature from HTC HD 7 or HD 7 Mozart. It has a 3.8 inch WVGA LCD and a 1GHz processor, 8GB internal memory and 5MP camera which are the default specs for a WP 7 device.

HTC 7 Surround is the looks most different from other HTC WP7 devices as it has a slide out speaker instead of a slide out keyboard. Again, the device has nothing different in specs but its sound is great because of its speaker which makes the device great for watching videos.

Moving from HTC devices, which look like the leaders in WP7 devices, we look at Dell Venue Pro. This is the only WP7 device announced by Dell. It has a 4.1 inch screen with a 1Ghz processor, 512MB RAM and 8GB storage, again nothing different from otherWP7 devices but the device has a different look with its slide down keyboard. Some would also say the slide out keyboard of the device makes the device a little bit weird but some users would find it to be attractive. But personally, I would not be comfortable with this kind of a keyboard.

LG announced two WP7 devices yesterday and one of those was LG Quantum. This device has a physical keyboard and a 3.5inch screen with a good rounded look. LG Quantum has nothing different in its specs. LG Optimus 7 is the second LG WP 7 device and it has a different look from Quantum. It has a 3.8 inch screen and its specs are almost like LG Quantum but it does not have any physical keyboard. Both these LG device has nothing different like the WP 7 devices of HTC or Samsung.

Samsung also looks like a big player for WP7 devices after HTC as their phones have Super AMOLED screens which are better than other devices. Samsung focus looks like Samsung Galaxy S and it has a Super AMOLED 4.0 inch display. It has 256MB RAM with 8GB of internal storage and 5MP camera. Samsung Omnia 7 on the other hand looks totally different from Samsung Focus and it also has a 4.0 Super AMOLED capacitive touchscreen.

One thing is for sure, all these phones are expensive from what we’ve heard. Which one would you chose?