Amazon is very serious with their Kindle e-reader as they have reduced its price to $139 and have introduced many new functionalities in it. They are still working hard on their Kindle app for iPhone , iPad and iPod touch. Their app was ahead of Apple’s own iBooks app as they had introduced audio and video features in their app which Apple followed later. Now, Amazon has again updated its Kindle app with new features like dictionary. 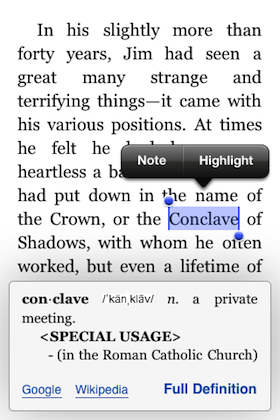 iBooks app already had the dictionary functionality since the start, but Kindle app has implemented this even better. When you highlight any word its meaning comes at the bottom automatically and with that you have options to search that word on Wikipedia or Google. Clicking on the full dictionary option opens the Oxford American Dictionary which is automatically downloaded with this 2.2 version of the app.

This new version also allows users to search inside a book and has some more improvements like better line spacing among others.