Remember the Microsoft Courier? In September last year, when rumors of the Apple “Tablet” were sky high, emerged the tablet from Microsoft that made us forget about the Apple “Tablet”  for a while. Lets go back in time, shall we? Gizmodo revealed to us the Microsoft Booklet. A multitouch, dual screen device that came with a video and some photos for us to drool over. 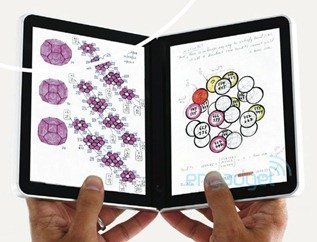 After a long wait, Engadget has exclusively posted lots more photos and a video for us to drool over! According to Engadget’s source, the Courier is meant to function as a “digital journal”, measures 5×7 when closed, is 1 inch thick and weighs a little over a pound. It’s said to run on the same OS as ZuneHD, Pink and Windows Mobile 7 series.

As rumoured already, the device will have multitouch support, plus input via stylus writing and drawing. It will have a built-in camera and a headphone jack and will possibly be Microsoft’s e-book device. According to Engadget, everything entered into the device will have a website that will display your entered data in a blog-like format. The rumored launch date is “Q3/Q4” whereas there as no pricing details as yet.

The video below demonstrates the various ways a user can interact with the UI. Head over to Engadget’s photo gallery to see old and new photos of the interface.