Microsoft Courier was an excellent concept of a note taking tablet and was supposed to launch next year (according to rumors) but now Microsoft has cancelled the whole project. It was never publically announced as a Microsoft product and its details were leaked first in September last year by Gizmodo, with screenshots and a video, which looked really promising. 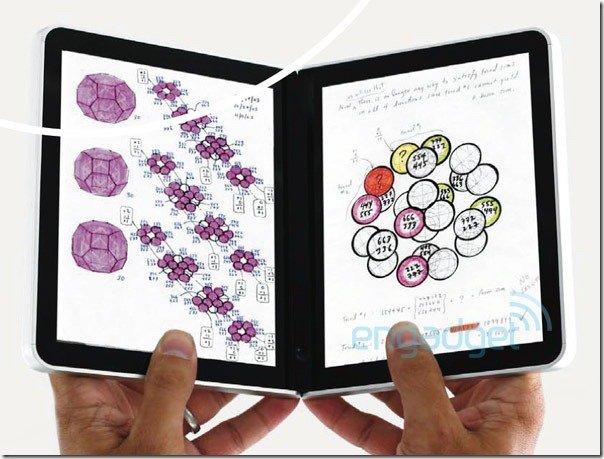 The war of Tablet computer started with the launch of iPad. After the launch of iPad other tablet computers also came to scene like Joojoo , WePad, HP Slate and many other Android tablets. Google also announced that they would launch their Android based tablet soon. But Microsoft Courier was one tablet which looked different and innovative when compared to all other tablets – dare we say, more innovative than the iPad.

Courier was a Tablet with two screens and it had a combination of both touch and pen-based computing. It would have provided the strongest competition to the iPad and definitely its dual screen would have attracted many people. Its looks resembled a journal because of its dual screen and it would have been great if it went into production.

At any given time, across any of our business groups, there are new ideas being investigated, tested, and incubated. It’s in Microsoft’s DNA to continually develop and incubate new technologies to foster productivity and creativity. The “Courier” project is an example of this type of effort and its technologies will be evaluated for use in future Microsoft offerings, but we have no plans to build such a device at this time.

It is sad for all of us that we will not see this amazing device in production. But still the concept is great and Microsoft may decide to continue the project again in the future. *fingers crossed*