A new report by DigiTimes claims that Apple is working on a smaller 7-inch iPad and they are planning to launch it later this year in the vacations. On the other hand, Samsung has shown a teaser video of their 7-inch Galaxy Tab which they will launch at IFA 2010 which will be held from September 3-8 in Berlin. Samsung Galaxy Tab has many features that are not in the current iPad and it is expected that the device will be successful. According to DigiTimes, Samsung is aiming to compete against the upcoming smaller iPad with their Galaxy Tab. They should also compete against a unicorn and some vampires while they’re at it. 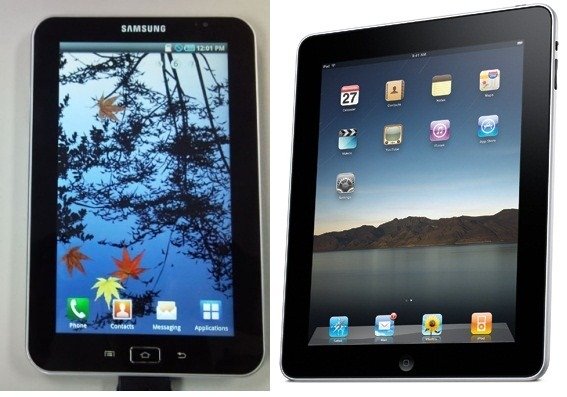 The report said that Samsung decided not to work on a 10-inch Tablet to compete against the current 9.7 inch iPad but they are launching their 7 inch Tablet next month way before the smaller iPad.

Since Samsung skipped the 10-inch panel format and jumped directly to 7-inch panel, the sources believe the company is actually aiming at Apple’s upcoming 7-inch iPad for competition and not the current model.

Samsung Galaxy Tab has many appealing features like their in-house developed processor, Android 2.2 operating system, 7-inch OMOLED display and a front facing camera for video chat. The report also mentioned that the is expected that the company would ship 100,000 tablet PCs per month initially.

On the other hand, many rumors suggest that the upcoming smaller iPad will also have many new features like Retina Display and front facing camera for placing FaceTime calls.

There’s one question in our minds: Why not compete with something that’s already out there, instead of competing with rumors?