For all the Mario lovers, Nintendo has released the Super Mario Run stickers app for iOS ahead of the game’s release. The app provides a number of Mario-themed stickers like Mario’s happy face, suspicious face, Mario waving goodbye, confetti and items like Mario’s cap, coin or mustache to be used during messaging. 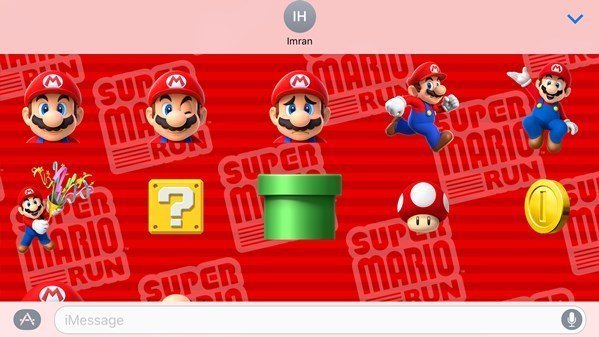 Super Mario Run stickers integrate with the Messages app on iPhone and iPad, allowing users to make their texts, photos, videos or screenshots expressive and fun with Mario when sharing. The best feature is the ability to add multiple stickers to a photo after it has been sent in Messages.

Mario stickers are designed to take full advantage of new iOS 10 Messages features. Messages now offer a wide variety of interactive, animated, and creative features to compose personalized and expressive texts. Users can do a lot more than just sharing GIFs or emojis; they can send quick reactions to received messages via Tapbacks, compose handwritten personalized texts via handwriting scratchpad, decorate messages with bubbles and screen effects, use Apple Watch’s Digital Touch and offers tons of new and old emojis to share. Users can also download emojis and games exclusively for iMessages. Moreover, shared web links, photos, or videos appear with a preview instead of just a URL link in Messages.

The stickers for Super Marion Run are an extension of the exclusive mobile game for iOS, Super Mario Run. As announced on Apple’s Keynote on September 7th by the creator of Mario himself, Shigeru Miyamoto, the game is scheduled to be released this December. It is for the first time ever, that Nintendo will release Mario on any other platform than its own.

Super Mario Run stickers are available in the App Store for free and require iOS 10 or later. The stickers will work with Messages app in iPhone, iPad and iPod touch.