Twitter has been working on implementing several new features to its platform recently like allows users to view YouTube videos directly from tweets on iOS and a new design for image viewing with the option to upload 4K images. It seems that the most recent feature the company wants to add to its platform is Facebook-like emoji reactions.

According to a recent report, the micro-blogging giant has been sending out surveys to a small number of users which shows a new reaction system that might eventually be added to the social network. Similar to the emoji reactions Facebook offers, the reactions Twitter featured in its survey include Like, Funny, Interesting, Sad, Awesome, Support, and Angry. 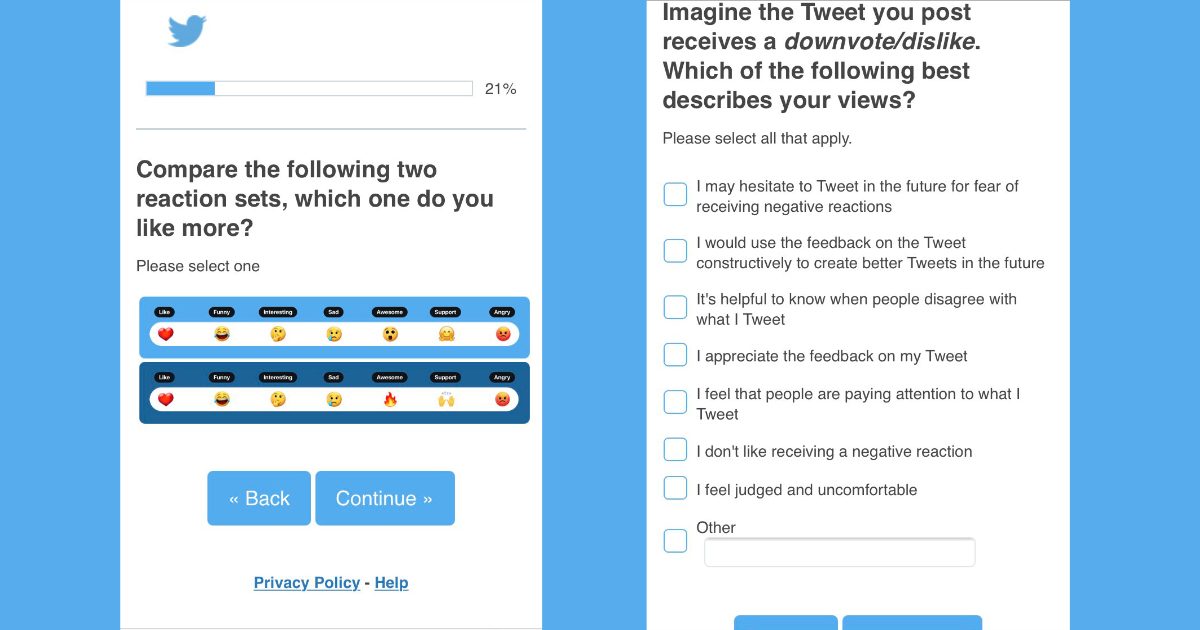 There seem to be multiple options of the same survey as users are seeing a different set of emoji reactions based on the survey they take. For example, in one set ‘Awesome’ is expressed with the shocked face, in another, it is expressed by the fire emoji. “We’re exploring additional ways for people to express themselves in conversations happening on Twitter,” a spokesperson for the micro-blogging giant said of the survey to TechCrunch.

Per this survey I just took, Twitter is considering adding emoji reaction sets and downvoting. I think either of those might be what forces me off this site. pic.twitter.com/uEgtmrSk7F

Though the reactions may clutter up the simplicity of liking a tweet, what’s more controversial is that the company is considering introducing a way for users to like or dislike a tweet. This could be done with either a thumbs up or thumbs down, a “100” in either green or red for “agree” and “disagree” or a green up arrow or red down arrow.

Twitter has said that the surveys are currently only “exploratory” and it is only doing so because it is thinking about ways users could add more nuance to the conversation they are having. Additionally, the company notes that if reactions are added to the platform, the “heart” reaction will still exist alongside the options.

Personally, as an avid Twitter user, the introduction of reactions to the platform will make it look really cluttered since it is known for its simplicity. Not only that, downvoting a post on Reddit can be done anonymously, imagine having to downvote a tweet with your profile picture attached to the action. We will just have to wait and see if the company decides to introduce these proposed changes to its platform.