Twitter announced its new ‘voice tweet’ feature for iOS users that allows users to tweet with their voice and send voice notes in direct messages instead of texts. The feature available for iOS users for now and the platform is currently testing the feature, only a limited number of users will receive the new feature. The company says all iOS users will soon be able to send voice tweets.

Voice tweets can be used to record original tweets on users’ timelines. The maximum time limit for each tweet is 2 minutes 20 seconds. However, if any user records for a longer time period, a thread will  automatically be created with up to 25 voice tweets.

Rolling out today on iOS, you can now record and Tweet with audio. pic.twitter.com/jezRmh1dkD

Tweets with voice will automatically add each user’s current profile photo as a static image over the audio attachment. The attachment will not be updated when the profile picture is changed. The app will support an audio dock mini-player within the twitter app which will enable users to listen to audio tweets while browsing their feed.

How to send Voice Tweets 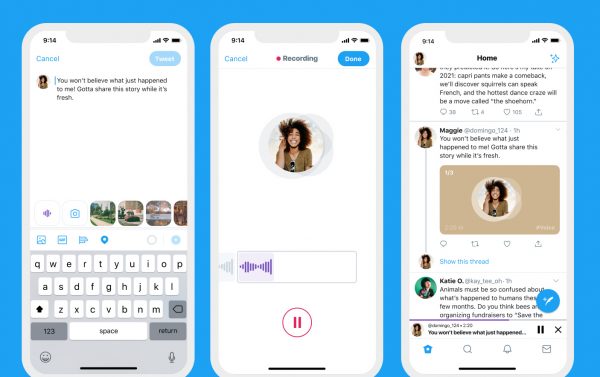 Here is how a voice tweet can be easily recorded:

As the new functionality is still under testing, users can only send voice tweets on their timelines. This means that is is not possible for them to reply or send retweets while using the new voice tweet feature.

“There’s a lot that can be left unsaid or uninterpreted using text, so we hope voice Tweeting will create a more human experience for listeners and storytellers alike. Whether it’s #storytime about your encounter with wild geese in your neighborhood, a journalist sharing breaking news, or a first-hand account from a protest, we hope voice Tweeting gives you the ability to share your perspectives quickly and easily with your voice. We can’t wait to see how people will use this to make their voices heard and add to the public conversation.”

There is no news about the feature coming to Android but the update is expected there soon as well. The company is also rumored to be working on a React with Fleet feature which will feature disappearing tweets.